That doesn’t sound right. I’m talking about the things I use with the younger children, who aren’t actually old enough to be being officially home educated, but who still get activities that can loosely be labelled educational.

Tigerboy usually just joins in with whatever we’re doing tbh. I do some vaguely Montessori type things with him – two bowls, a spoon and some cereal to be transferred between bowls. Bit of pouring. Keep meaning to get some pegs and let him put pegs on and off a cup too. And there’s beading – in a bit of a brainwave, I discovered that maxi hama beads as well as pony beads are great for going on to pipe cleaners. None of this is special stuff, it’s all just based around things we have around the place. And mostly it keeps him very happy.

Smallest is beginning to want things to be a bit more formal. She’s told me a few times that she has to go to school to learn things – thanks for that cbeebies. And probably other TV channels, and lots of picture books too. It is not the only way, and it annoys me that children are absorbing this idea that they have to be taught in an institution to be able to learn. But, nevertheless, she does want things she can call education. So we do Reading Eggs and Mathseeds, reasonably often. There are lots of educational games on CBeebies website for free, she particularly likes Alphablocks, and I’m fairly sure that she is going to learn to read fairly easily. As long as she doesn’t decide it’s hard.

For offline, obviously I read to her. And with her. We’ve Bob Books First!: set 1, level A

, that I love, and lots and lots of picture story books. Library trips happen at least once a week, sometimes more often – it’s interesting that she often picks out non fiction books there. Birds and flowers and last week a fabulous art book. She loves to go over books again and again, reading them to herself with varying degrees of accuracy.

We do lots of craft bits – I’ve loved being a Baker Ross blogger, and it’s meant that we’ve tried things I probably wouldn’t have bought for her myself. She can sew – lovely little felt kits that we blanket stitch round. I mentioned beads – hama is a favourite, as it would have to be really 😉 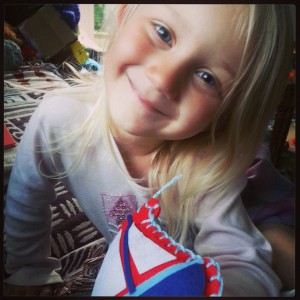 Also, magazines. We’re RSPB members, and there’s a magazine that comes out from them every so often. I splurge on a cbeebies one every now and then, as it often comes with nice little resource bits, like foam alphabets, or numbers. This week, we were lucky enough to be chosen to review the new DC Comics superhero magazine, and she has loved going through that and doing the various puzzles. Counting, matching, colouring, it’s all good stuff.

Ooh, jigsaws! I nearly forgot jigsaws, and she loves them. And matching games – we’ve had a Mike the Knight one for review, and there were some Something Special cards that she won from the pass the parcel from our party. Great for observation, memory, turn taking.

Early years home education is just about playing, crafting, exploring. All the things you’re doing with your child anyway, and you just keep on doing them. It doesn’t have to cost a fortune, and it doesn’t have to be extravagant. You don’t need qualifications – and there’s lots of help and support out there if you want to give it a go.