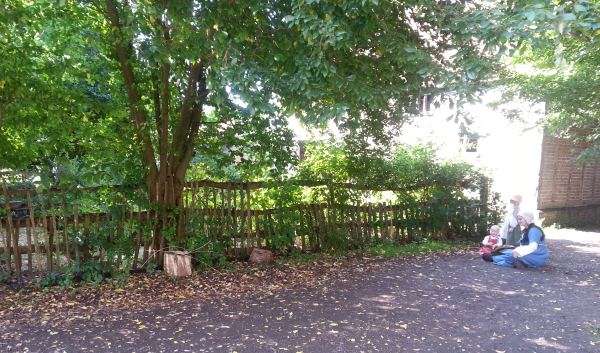 I’ve participated at Kentwell in 5 reenactments now, 3 main events where there are around 250 Tudors about, and two minis, closer to 100. Each time I’ve been on the barnsward, as a felter, in the barnschool, in the cotte. Smallest has grown up there, it’s her summer holiday, and Tigerboy is experiencing the same.

They love it. They love the space, the freedom, the community around them where all adults watch children, but children can wander and explore and play. And Tigerboy really made the most of it – he never looks back! I spent a lot of time following him about and retrieving him when he tried to wander to the stableyard – not an ideal place for very small children on foot.

Home, even though the garden is enclosed, doesn’t feel so safe. It could be the road – just a gateway away. Or even the gate itself, with no knowledge of who might come through it, leaving it open. Perhaps it’s also because the garden is so enclosed there isn’t that feeling of wide open emptiness. And adults don’t have the same attitude to children, that they are people, that they can be a part of what is going on, that they are worth talking to, involving, allowing to have a say.

I don’t know. I can’t quite put my finger on it. But I know I want to be more outdoors, not sat behind this screen, idly poking at social media and feeling antisocial. So I’ll be making more of an effort to get active – will be getting behing #GBwalk as it launches, and doing some more on #WeLoveForests.

On that note, there’s still a tiny bit of time left to enter the Foresty Commission competition to win a camping break in a forest. Which would suit us down to the ground – we’ve only managed Kentwell breaks this year, and could do with something that doesn’t actually involve working all day, even when the working is fun. (Reenacting does involve work. Felting is work. Looking after and teaching children in the barnschool is work. Cooking in the cotte is definitely work. And I do all of it with my children at my skirts.)

If you’d like to know more about the Foresty Commission, including details on that holiday competition, check out their website.

Now if you’ll excuse me, I think I’m going to go sit outside for ten minutes before I have to cook tea.