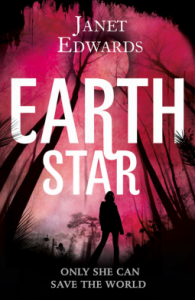 I very much enjoyed Earth Girl, the debut SF from Janet Edwards. So when I saw via twitter that the sequel was being released for review via netgalley, I couldn’t wait to get my hands on it.

18-year-old Jarra has a lot to prove. After being awarded one of the military’s highest honours for her role in a daring rescue attempt, Jarra finds herself – and her Ape status – in the spotlight. Jarra is one of the unlucky few born with an immune system that cannot survive on other planets. Derided as an ‘ape’ – a ‘throwback’ – by the rest of the universe, Jarra is on a mission to prove that Earth Girls are just as good as everyone else.

Except now the planet she loves is under threat by what could be humanity’s first ever alien contact. Jarra’s bravery – and specialist knowledge – will once again be at the centre of the maelstrom, but will the rest of the universe consider Earth worth fighting for?

I got it yesterday morning.

About 4 hours later, I came up for air 🙂

This is a grand adventure SF style. Alien invasion – or is it? I won’t spoil the plot with any reveals, but I will say if you like your SF fast and furious, with a likeable teen protagonist, you can’t go far wrong here. As in the last book, the tone is partly set with a futuristic slang, and that’s the one thing I’m not that convinced about. My reading style is to immerse myself into a book, and I can’t do that if I keep running up against words I don’t recognise. That’s a very personal issue though – and while I started the book grumbling internally about it, as the story picks up I get to the point where I really don’t care – I just want to read it all now.

Jarra is a fun character. She’s not perfect – she’s quick tempered, and has some difficulties admitting to emotional issues, she had a difficult upbringing without a proper family. However she’s enjoying her first adult relationship and beginning to explore her own attitudes to the prejudices that attach to her status as one of the Handicapped in a more reasoned way. Not that she gets a lot of time for exploring – the story rattles along bouncing her in and out of a variety of difficult situations, boredom is not an issue for her or her friends. I was pleased to see a bit more character development in this story, of both Jarra and some of the other characters around her. You get to learn a lot more about the military as well, which is interesting. The societal structure that is described is an interesting one, and could stand to be explored further.

All, in all, this is a rollercoaster ride, which I highly recommend for all readers from younger teens up. And I can’t wait to get my hands on the third instalment.

Earth Star is published on the 15th August. If you’d like to support your favourite independent bookshop and this blog, feel free to pre order via my Hive affiliate link.