On Saturday I went to London again. I know, two weeks running. I took Big, Smallest and Tigerboy with me this time – the BigIF rally we were attending in Hyde Park was billed as family friendly, so I thought it would be a fun day out. 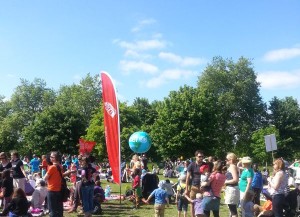 It was a really hot day. We trained to London and then tubed to Marble Arch. I expected that there might be signs, or some indication of where the rally was taking place as we got into Hyde Park – no. Loads and loads of people wandering about, but no indication of an organised mass anywhere. I always forget the scale of London, and this was rather offputting. As we set off walking down through the park, we were approached by someone asking where the Serpentine was – not sure why I looked like I might know. I asked if she was there for the Big IF, and she looked at me blankly, saying she was just meeting a friend. (I think I might have come up with a more specific meeting place tbh.)

Texting with a friend who was already there set us on the right direction – thanks Hannah. And as we got nearer we saw people in T shirts with BigIF on them, so I asked for directions 🙂

It amazed me that there could be a gathering of 45,000 in one area of a park in London, and people in the rest of the park oblivious to it. Once actually in the rally area, we headed towards the front to hear the speakers, but as I mentioned it was blazingly hot, and 2 1/2 hours of travelling had pretty much defeated us already so we ended up retreating to the icecream van and some shade. Sadly, although there was a second screen set up part way down the field, it wasn’t near enough to the shade that we could see or hear anything – so I was the closest I’m ever likely to get to Bill Gates and I didn’t hear a word he said 🙁

Later in the afternoon though, there was a special bloggers’ roundtable event set up with two activists : Elly Ahimidiwe from Tanzania and Aimee Manimani from DRC (Congo). They were incredibly passionate and fascinating people – I learnt more in an hour about the various challenges facing their countries than I’ve absorbed from media in my entire adult life.

Tanzania is struggling moving from a socialist system of small communal farms where people worked collectively to feed themselves and each other to find a place in a world populated with greedy and dishonest corporations. People are being displaced from the land that supported them by companies coming in and promising employment and facilities, then growing biofuel crops which take 4 years to come to fruition, but leave the land exhausted for 20 years. Unsurprisingly, they don’t get the hospitals and schools they are promised and the jobs don’t last that long either. Part of the solution Elly proposed is that Tanzanians need better education as to their rights – that their government should be providing facilities, not incomers, and that land should be being used for food, not fuel. Greater transparency is needed from the companies coming in, and this can only be enforced at a governmental level. (Elly, please if I’ve paraphrased too much, do correct me either via comment or contact form!)

DRC – Congo is a completely different story. Corrupt government, massive natural resources but that are difficult to access and running battles with gunmen are leaving women and children displaced and starving. Again transparency is an issue – aid arrives and disappears into the pockets of gunmen and corrupt politicians. Pressure from external governments might help, though I think overall it’s a massively complicated situation that I’m not going to come anywhere near explaining in a single blog post. I’m hoping to mail with Aimee further and be able to explain more about it.

So, the issues of food security, land grabs, tax evasion and transparency were all raised and hashed out around the table. I took down 3 1/2 pages of notes, and it’s all still rattling around my head, with me not knowing where to start.

Undeniably we should be pressuring our government to do better. We need them to be transparent in what they are doing and what their dealings with multinationals in aid delivery actually means. We should ensure that nothing we do aids companies in dismantling the rights of those living on the land – I’m concerned that the aid package David Cameron is touting around might be part of the problem and not the solution at all.

Alongside the charities that were part of the Big IF, I follow and read War on Want who linked to this on Saturday’s campaigning this morning. And it was recommended that I look up Global Witness for more on what companies are doing what, where.

The quote in my headline was from a jigsaw piece I saw from the craftivist collective – more on that in another post. But I’m coming to the conclusion that living simply isn’t enough. Certainly there are enough resources in the world IF we all share. But there are lots of people who don’t want to share. So as well as doing our individual bit, we need to watch what is going on, speak up for those who have no voice, and change behaviours of our government and the companies around us. Whatever action you can take is better than no action. And more actions are better than one.

Don’t just read this. React. Be part of the solution. 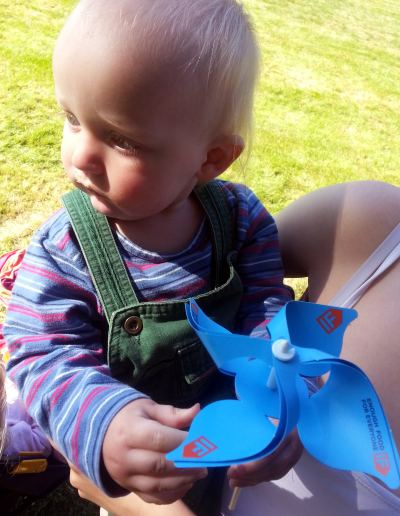 Disclosure: I was invited to attend the bloggers roundtable by World Vision UK, and my travel expenses are being refunded. I am not being recompensed for this post and opinions are as ever, my own.