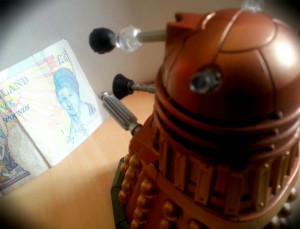 So, there’s this little campaign started by The Women’s Room on to make sure we retain a female presence on banknotes. Elizabeth Fry is about to be removed, and I think the idea is that she’s going to be replaced with Winston Churchill. Which means the sole remaining female presence is the Queen, and she’s there by birthright – not because of anything she’s achieved. Hang on, let me link you to a much more informative post on the whole thing over at Nixdminx.

Right, all caught up now?

The thing is, I’m not sure many people really care. And I’m not sure whether this really is worth caring about. I know the argument that we all use money all the time, but how often do you actually look at it? Can you tell me who, other than the queen, is on the notes you’ve got already? I can’t. I view it as just one of those things – largely irrelevant to my life, indicative of a certain attitude about women and by extension me, but not something I can get massively worked up about. Because I can’t quite see what difference it would make.

But then, on Saturday, the announcement we’ve all been dreading. Matt Smith is standing down from Doctor Who at the end of the year – despite the embargoes, the news leaked on the front pages of several newspapers and Twitter was alive with speculation as to who could possible replace it. And the suggestions started. Does the new Doctor have to be white? Does the new Doctor (whisper it) need to be male??

The discussion wandered all over the place. And I think it’s a far more interesting discussion than the one about banknotes I’m afraid. The Doctor is big news. Headline news. Talked about here there and everywhere. Would putting a woman in be a token decision and kill the series, or would it be brave and actually send a message that not only men can headline a peak time TV show? Or is it completely irrelevant, the Doctor has to be male?

Women are half the population, but we are kept in pigeonholes in terms of TV. Once we get too old we’re retired. We must be attractive, and we can’t ever speak out – witness the appalling treatment of Mary Beard for daring to be on our screens as a female with a brain, instead of a female with a body. (I think you’re allowed to have a brain as a woman if you squeeze yourself into posh clothes – you mustn’t ever be scruffy though.) The Sarah Jane Adventures was one of the most interesting series in terms of female characters that I’ve seen in a long time – and I think the success of it showed something about watchers that BBC and other TV managers should be paying attention to. Women aren’t just in the kitchen any more. We’re all over the place. We’re in tech, in business, in blogs. And we want to be represented as who we really are.

The history books don’t represent what really happened – and putting a dead woman on the back of a piece of paper might be a minor achievement, worthy of a headline or two. But putting a female Doctor on the BBC? That would make ripples all over.

If you want to blog about the banknotes, all the details are in Nixdminx’s post linked above. And I’d love to read what you’ve got to say, so do drop back and let me know. If you want to sign the campaign it’s here.

What do you reckon? Who would you choose for a banknote? Or the next Doctor? Or do neither of these things interest you?