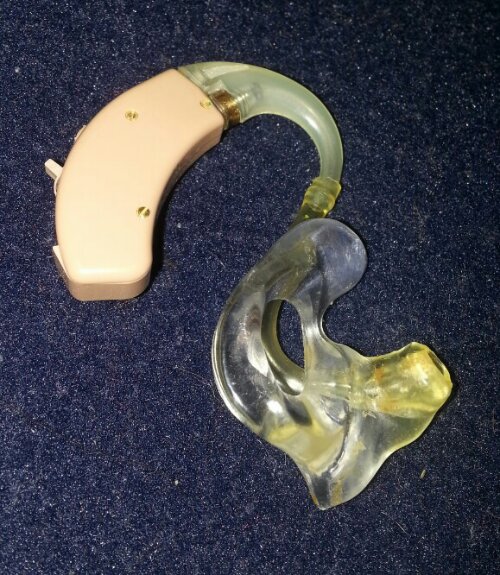 This is a hearing aid. It doesn’t belong to any of my children, thankfully. Instead it’s mine. Those in the know will realise it’s an old style analogue aid, not a digital. This is actually my second one, I stopped wearing my original one when Big was born, then lost it in a house move. Basically she screamed all the time, and I didn’t need that in stereo.

When I got the replacement it was before digital was available on the nhs, the audiologist I spoke to said I’d be a prime candidate and he’d make a note to call me back in when he could. That was around 10 years ago I think, and I’m still waiting.

Because of my history of hearing loss, all my children have had extended involvement from audiology services. It’s been fascinating to watch how that has changed over the years. Big was born in the Northern General Hospital in Sheffield in 2000, and they were doing a trial of a new neo natal hearing test that has since become available for all babies. She failed the one the day after she was born, but passed one 6 weeks later and there’s never been a question about her hearing. She had the normal (and utterly pointless) distraction test from two health visitors when she was around 9 months old, I think that’s been phased out now.

By contrast Small didn’t pass a test until he was over 5 if I recall correctly. That was the full whack with head phones and little whistly noises, and when he was done the audiologist said “he can hear fine, anything else is just Small”. Sussed him out rather well in the space of half an hour!

Tigerboy passed his neonatal test (done at six weeks because of the home birth). Despite that he was still called in for follow up at 9 months, and he didn’t pass then. The little in ear test to see how his ear drum responded showed a flat line instead of the required peak, probably because he had a cold and fluid behind the drum.

Today was the twice postponed follow up to that test. As well as the distraction test (whistle noises from the side, child looks and is rewarded by a dancing toy lighting up), there were proper in ear devices to measure individual ear response. He passed with flying colours and the eardrum charts had lovely peaks.

So it appears at least at this point none of my children take after me in the deafness stakes. Which makes me very happy. I know assistive technology has come on hugely. I’m still pleased they don’t need it.

Think I might look into a digital aid for myself though.