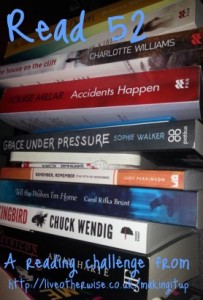 The background: I’ve challenged Big to read 52 books this year. She will probably be mentioning them over here on her blog. I’m also going to have a crack at reading at least 52 books myself, and more importantly, I’m going to keep track of what books I’m reading to the little ones. I’m going to do all of that in a weekly post, and I’ve also set up a google plus community which you’re very welcome to join. (If you need an invitation, leave me a comment using relevant email address – which will stay hidden.)

, which has my question as the very last question of the author’s QA in the back. How cool is that? So obviously, I got hold of Slated

and read that – and it was SO good! I was really pleased that I had Fractured to hand and could just keep going, but not terribly impressed that I then had to stop at the end. I need book 3!

The plot is straightforward – teenagers who have committed crimes have their minds wiped, and are then reeducated and released to new families. They have a device on their wrists that causes pain, blackouts and ultimately death if they don’t remain happy and level at all times. Kyla, the lead character, finds this particularly difficult, due to the nightmares she has. Nightmares which seem like memories, which shouldn’t exist…

To lead with the negatives – there are a few holes in the scenario. It’s hard to imagine that families would sit idly by and let their children be taken from them, and yet that’s the implication at various points in the story. But the authoritarian government maintains a very tight hold, there are Lorders everywhere you turn, and people are just taken. Perhaps knowing that the child remains alive means the family has less incentive to fight back? Whatever the reasons, the story romps along at a fabulous pace, and as long as you can cope with some violence and death, you’ll be OK. I certainly intend to stalk Teri Terry on twitter until she gives me the final part of the trilogy! Go, read, you are unlikely to regret.

With regards to the giveaway, my blog is fighting back tonight – the plugin that chooses the winner from the last post doesn’t want to work 🙁 It’s a bit late to beat it vigorously, so I’ll come back to that tomorrow.

Also, I’m not quite sure what I’m going to giveaway this week. I’ve got heaps of books around, so I’ll have a dig about, but basically it’s a surprise. If you’re up for that, get stuck in, and tell me what’s top of the nearest heap to you to enter.

The competition closes next Thursday 21st February at midnight so that I can announce the winner next Friday. And you can have an extra entry for sharing this post, using the badge or joining the linky with your own Read52 post – but you must leave an extra comment for each thing you’ve done, telling me what it is. As I’m doing the posting, I’m afraid it’s only open to UK – but if you’re international and happy to arrange to have it posted on you can do that – I’m only sending to a UK address. Draw will be made using the lovely plugin and the winner is, which relies on separate comment entries.