A quickie review (just) before Christmas (though if you’re a twitter follower you’ll know I tweeted an even quicker one yesterday!) – obviously this isn’t an in detail cover of this item because we’ve only had it a couple of days, and the first day it was on charge! However, if you’re strapped for a pressie – suddenly discovered that your parents have bought your child exactly the same as you did (don’t laugh, happened to me last year!) you could do worse than supply them with a KidzStar tablet. (They are available at Argos who I believe are open for the next few hours 😉 )

Smallest loves her new iPad. It’s rugged and easy for her to manage. The silicon bumper, supplied with it, means I’m reasonably sure it’s safe from accidental bashes, and the pen, attached with a cord slots away into a neat holder, so this has survived three days so far. A good sign. The screen obviously isn’t as responsive as something like a high end phone, but to be honest, this isn’t a bad thing, it means she has to make a firm decision to do something rather than just swiping at it madly. The pre installed software has held her enthralled, and while it annoys me that I can’t attach it to the play store and pop on lots more apps, she hasn’t complained about the lack of angry birds once.

The battery life appears to be between 4 and 5 hours under solid play, which isn’t that far off a games console – longer would be nicer obviously, but we’re coping. And we’ve yet to break into the included £10 gift card for the proprietary apps store, but that will be a nice treat next week.

All in all, Smallest is utterly thrilled with her new toy, and while a tablet that actually allowed a parent to do other things would be better from some points of view, I think she’d prefer it this way – I’m less likely to steal it. Apart from that, I’m impressed. 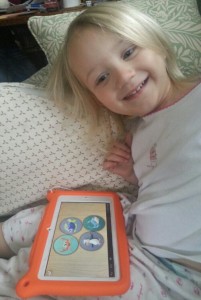