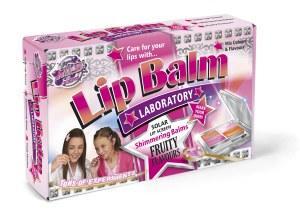 One of the plus points of being sent items for review is that very often I can work them into our educational plans. So it was great that we were offered a Wild Science Lip Balm Laboratory

for Big to take a look at, as there are all sorts of educational experiences in a kit like that.

First of all there’s the following instructions. Then there is some understanding of the science behind it all, plus the actual activities of the measuring, melting and blending. And at the end of it you actually have a product that you can use! Which is rather better than doing most science experiments that I remember from school 😉 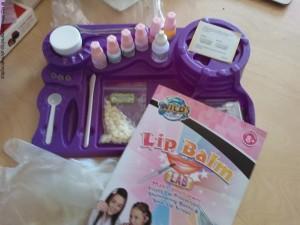 Only criticism we had of the kit is that it suggests you heat water in a microwave to melt the wax beads, but gives no indication of length of time at power level. And in the end, we found using hot water from the kettle was far more effective, and even then the melting took a lot longer than described. It is true that it was a cold cold day, so the beads may well have been fairly well chilled, but apart from that, the kit worked well.

I liked the tray that contained everything and kept it organised. And unusually, it fits back in the box like this, rather than having to dismantle it again.

And here you have the scientist in action. 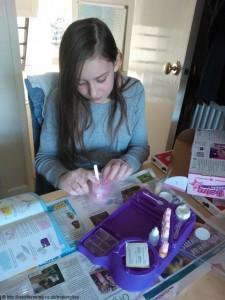 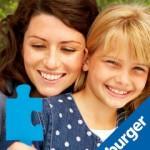 So that was one educational activity. Independent working – although I was there. The second activity, a Ravensburger jigsaw for the Ravensburger Puzzle Club, turned out to promote cooperation and team work, and if you’ve got older children, you’ll know how important that can be!

It continued the laboratory theme 😉

The puzzle was great – not so complex as to put them off, but definitely challenging enough to interest them and keep them occupied for a while. So that’s a 200 piece XXL – ideally targeted at slightly inexperienced 8 and 12 year olds. 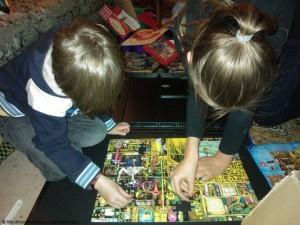 I’m a big jigsaw fan, but it’s not something I get much chance to do these days. I couldn’t resist directing operations from the sofa though, just to get them started, with sorting out edge pieces and so on. Once Small was fully engrossed though, I pretty much left them to it. And the sense of achievement they both had when they got it finished was palpable. And since they refused to take it to pieces again immediately, it’s just as well we’ve got the Ravensburger Puzzlestore 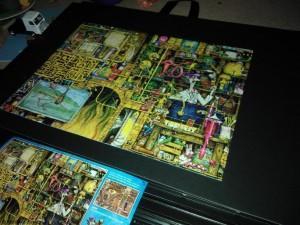