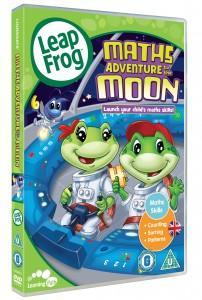 A fun new, educational release from the popular and trusted Leap Frog brand, MATHS ADVENTURE TO THE MOON really launches children’s number skills! Never before seen on UK TV and out to buy on DVD from the 9th May (RRP GBP 9.99).

Join school-going frogs Tad and Lily, and some new friends, on their latest adventure as they blast off into space on an educational expedition. On a mission to collect everything they need for their maths project they find that counting, sorting and using patterns and numbers is a skill they need to use everywhere ? even in outer space!

Leap Frog makes learning fun with this brilliant curriculum based DVD, created with input and endorsement from the Educational Advisory Board, and ideal for pre-school children and their parents. The loveable characters have anglicised voices for the UK market and the learning is fun, informative and accessible making MATHS ADVENTURE TO THE MOON an easy way to help little ones get to grips with early maths.

Well, the first point is that all the children seemed to rather enjoy it, even though it’s not really at their age. It’s a bit young for Big and Small, but a bit old for Smallest – probably aimed at 3 to 4 year olds I’d have said. And I’ve have thought it would work pretty well on that age range, catchy tunes, lots of cheerful animation, fun adventure.

The maths side of it I wasn’t quite so sure of, but that’s probably my Montessori leanings coming through. It’s a bit busy somehow, there’s a lot going on (which I suspect many ppl will see as a plus point), and we ended up debating some of the points and whether they were explained in the best possible way. (Again, this is probably not a bad thing. Discussion of mathematical methods is a great way to learn!) But this isn’t meant to be a single solution, and as one of a range of resources, I’d have thought it would go down well, and at RRP 9.99, it’s not overly expensive either.

So, to the competition. Like I said, I have three copies up for grabs, UK only, sorry. You get an entry for leaving a comment, and a second entry for tweeting the post, but only if you leave a separate comment telling me you’ve done so! You’ve got a week to enter, I’ll pick the winner after midnight on Monday 16th, but if you don’t get your details to me by Friday 20th, I’ll be picking again. Address will be passed to the PR organising the competition, if you’re not happy to have it passed along, please don’t enter.

That’s all. Get entering 🙂

Disclosure. We were sent this DVD free of charge for the purposes of review.