Today I dragged the children out of bed just after 7, nearly three hours earlier than their preferred rising time in order to drag them 45 mins across country to an open day for potential re-enactors at Kentwell Hall. It was a cold start to a long day, as we drove the bright sun was scaring the frosts of ploughed earth into wisps of mist, setting a scenic background to our travels.

I’d have appreciated it if that had been as interesting as the journey got, but sadly Smallest decided to license up the proceedings further by regurgitating her early breakfast banana all over her lambswool jumper 🙁 She seemed fine once she’d done, the jumper not quite so good. Thankfully we made it the rest of the way without further incident, pulling up to park a couple of cars away from our friends Marcus and Michelle with their daughters. Big was thrilled to catch up with them as it was the first time she’d seen C since her stay in France.

First order of the day obviously a cuppa as we started to gather and peruse handouts on making authentic Tudor costume. For my sins I have 4 of us to clothe, and even if I make everything from scratch the whole venture is going to set us back a couple of hundred pounds – I’m not up to making shoes, and we’ll also need wooden bowls, pottery cups, knives, spoons and other sundries. A friend and experienced Kentwellie, Katy had managed to snap up a secondhand kirtle that she thought would do for me, so at least that’s a start.

Tea drunk, time for the first talk of the day, this one aimed at new participants. A chat about how Kentwell came to host re-enactments and how they work, and what we could expect from the rest of the selection process. And then we were sectioned off into small groups and sent off for a tour with one of the existing participants, getting the real lowdown on the house and its immediate environment. Tbh, if we don’t get to go any further, the tour made today’s trip out worthwhile. Although both Big and I would still be very upset to not make the cut.

After the tour another talk, this time a briefing on the chosen year, 1553. Big and I have been doing research on it already – it’s an exciting year! Three monarchs, including the ill-fated Lady Jane Grey, and Kentwell in the middle of the region in the thick of it all.

And then we had lunch 😉

Actually to be more accurate and then we queued for lunch. And while we were queueing I caught up with dyers and weavers – two of the stations that I’m most interested in. Regular readers will know that I’m quite into my yarn crafts – goes right back to carding and spinning wool at primary school, round about the same age I learnt crochet from my step-grandmother. The queue moved very slowly so I also had plenty of chance to chat to friends and the kids had lots of time to explore around the house.

After lunch, a chat for new participants this time more about the shape of a day during a recreation, with a Q and A session. And then more queueing, this time for a personal meet with the head of Kentwell, who does a quick interview with every applicant which feeds into the decision he makes as to nay or yay and if yay, what the station will be.

I’m hoping for something working with wool. Big was as well, but as it’s preferred to give older children a bit more distance from their parents, if I get woolshed or felting, she may well get something else entirely. Cross that bridge when we come to it I suppose.

And very eventually, we wended our way back to the car and home – last off the site (along with our friends 😉 ) Admired the supermoon on the way home, but didn’t stop for pics, only for food at macdonalds when we were nearly back. And now I’m flagging, but the baby is still bouncing frantically around the floor. I’m hoping this blogpost isn’t as disjointed as I suspect it is, but I’ve been interrupted half a dozen times when writing it, and rather lost the thread.

I wanted to talk about everything I think we’re getting out of this process. An enthusiasm for history. Bringing the past to life. Chance to socialise with ppl from all walks of life, learn new (and very old) skills, understand politics, conservation, all sorts really. But I think I might have to leave that for another time when my brain is working. And instead, I’ll finish with a pic. Always a good way to end. 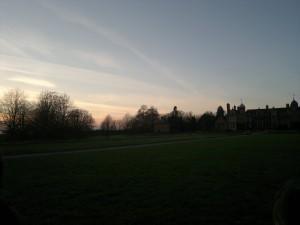