Once a month or so we clamber in the car and trek a fair distance to meet up with other home educating families and join in a history club. It’s based loosely on The Story of the World: Ancient Times

, and I can’t remember if this is our second or third session – may be the second one we’ve made but the third overall. You can check out more details of progress on the excellent home education blog, petits haricots and later on I’ll pop round to see if any of the other participants have blogged.

Anyway, my contribution to the crafts session was peg dolls – I’ve decided to do this each time so that the children can build up a collection of peg dolls in chronologically arranged costumes. However, when I went to look up a suitable costume, I discovered Cretans of the relevant era basically wore loincloths, which is not really something you can do to a pegdoll!

First you need materials. Peg doll, brown felt for the head, lolly stick for arms (although pipe cleaners would work just as well if not better and are going to be added to my craft supplies in bulk), glue, string for attaching arms and furry material for the body. 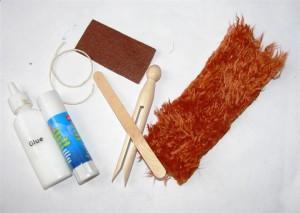 First of all, you do the head. I found that using a pritt type stick in a very generous way worked best – put a thick stodgy layer around the shoulder area and wrap the back of the felt round. Then dob more glue on the felt, bend it over the head and wrap the front around, so that you get a sort of triangle affair that hints at minotaur horns. While this is setting a bit, fasten the lolly stick arms on with a bit of string – you may have to help your children with this bit depending on their dexterity. 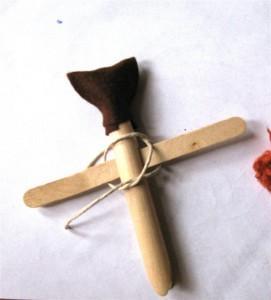 For the body we used very furry fabric. Cut a slit in the middle like so. 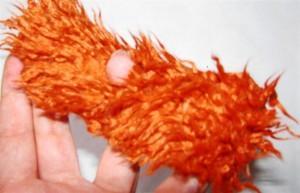 And gently poke the head through so that you end up with a minotaur that looks a bit like this. 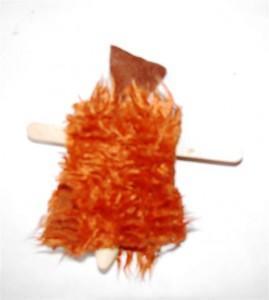 And there you go, one peg doll puppet minotaur. If you’ve a black felt pen your child can draw on a face, although I neglected to get a picture of one so adorned.