When I mention home education, one of the most common questions is how many hours do you teach? (That usually follows on from do you do the teaching. Which is one that makes me wince slightly.)

It’s difficult to explain. There’s very little teaching here. Learning happens as and when it happens – it requires the children to be interested in something, for me to facilitate that interest or, more accurately, to seize the moment.

Like tonight, at the dinner table, with a potato. 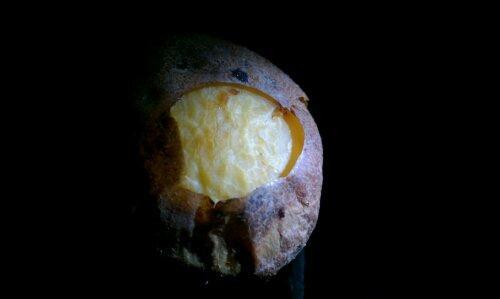 This is not just any old potato. This potato is the world. More accurately, it’s the world spinning around the sun (played in this picture by an AA dynamo torch), demonstrating the tilt to its axis that cause the difference in the length of days in the northern and southern hemisphere depending on the season.

And how did the conversation come about? I was quizzing the children as to when Christmas happens in Australia. It turns out they didn’t really know – Big knew that it happens in summer instead of in winter so after some collaboration with Small and counting on her fingers she decided that July 25th was a likely candidate. I could see where she was coming from – so this led on to a discussion of timezones around the world and then on to discussions on longer and shorter days, with quick sidetrips into mentioning Norad tracking Santa and the shape of planets’ orbits around the sun. (Elliptical, which they knew, birthday walks and all that.)

And that was dinner. With added science, bits of history, occasional eyebrow raising moments (apparently Small is of the opinion that Scotland barely has television yet, probably only having up to three channels) and of course, good food.

And all of that was at the end of a home ed group day. Starts with music theory, goes on to music practice, has a social lunch and then today was art with Kandinsky style circles. 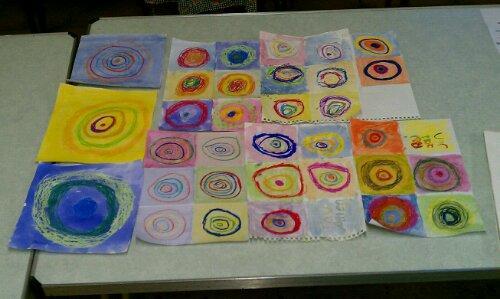 As well as art there was plenty of time to play impromptu games of catch, memory circle games (can’t believe how long they went on with that, and they did a recap after we’d tidied up!) and Small did very much reading. More reading for them both after tea, and it’s a very full day.