I do a lot of things for the children. I look for opportunities for them to learn and experience stuff that I never got the chance to, and I tailor what I offer to their interests. So when I was offered a chance to attend an exclusive preview showing of the new Lego HeroFactory mini movie, I knew I couldn’t turn it down. Small would never have spoken to me again.

Even when I realised it would mean driving into London.

Grr to the satnav. It was not a good journey. Can I claim it was educational in itself? We drove past Nelson’s Column after all. And apparently Buckingham palace, but I may have been paying more attention to the lanes, the traffic and the satnav to identify it at the time.

And if we hadn’t turned into a sainsbury’s carpark at a roundabout that the satnav didn’t know existed, or if I’d followed the signs to cinema parking in the enormous carpark of London Westfield Shopping mall, we’d have made it on time. As it is we were minutes late – and Small, bless his heart, didn’t have a meltdown. In fact he even said I understand when I said I was sorry, and he coped with every minute of stress.

I love my boy. And those who have met him previously will be ever so impressed by that achievement.

There was a lovely lady from Lego waiting at the cinema, and when I produced my VIP pass they beamed. And make sure they get the VIP goody bags at the end, she said, and we were ushered in to our reserved VIP seats 🙂 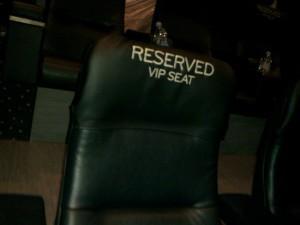 Big was impressed by the HeroFactory branded popcorn and bottle of water at every seat. Small was just absolutely rapt – I had to steer him into his chair as he was staring at the screen over his shoulder and tripping up the stairs 😆 He really enjoyed the film. Smallest just enjoyed exploring the cinema – sadly it was rather more empty than it should have been I think, so we went up and down rows of seats and up and down stairs to her heart’s content.

I quite liked the film. It’s nicely put together, with suitably heroic activities, the classic older guy picking on promising youngster, and even a robot who appeared to be wearing jedi style robes. Not quite sure what that was about. Small told me all about all the Heroes in the movie – I’ve no idea how he knew about them beforehand, I assume he has to have been exploring the LegoHeroFactory website and playing the games on there.

And at the end, we exited to a minor disaster. Somehow there was only one VIP goody bag, and the staff were mortified. If the kids hadn’t known there was anything special coming, or if indeed the staff hadn’t been quite so upset, I don’t think they’d really have noticed, but as it was, they did. Big stepped up to the plate and let Small have the bag that was there, and Small assured the staff it really didn’t matter, we were OK and he would share. PMM indeed – he really is coming along pretty well atm.

From there, we went out into the ridiculously large mall. 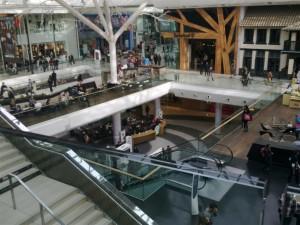 We found a Next and spent a giftcard I’ve been carrying around for ages, and bought Small a Haynes Manual for the death star T shirt. It seemed appropriate somehow. And then we tried to find child friendly eating places and failed dismally. As shopping centres go, it really didn’t seem to be set up for children. In the end we bought a party platter of sandwiches from M&S (and do not get me started on what an absolute and utter ripoff that was) and legged it to the car, to escape London via the A1 and South Mimms services. 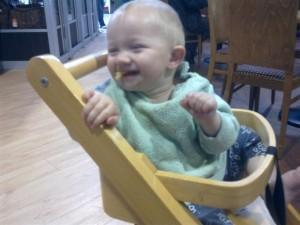 It was, all in all, a fab day out. Stringer

, the hero who came out of the goody bag, has been played with pretty much continuously, although occasionally he has mutated into Spider Stringer with the addition of some parts from LEGO Ben 10 Alien Force Spidermonkey

And just to prove how very lovely the ppl at Lego are, when I explained what happened with the goody bags, they too apologised and are sending one for Big in the post. Which will make for a more harmonious household at least!

Disclosure: we were VIP guests of LegoHeroFactory and received travel expenses to attend this showing.