A little while back I entered a competition in the Times. It was celebrating/ promoting the National Trust Food Glorious Food campaign, and it included both admission and meal vouchers.

So on Thursday we used the vouchers – we took Tim’s brother and sister-in-law to Sutton Hoo, spent some time in the exhibition hall 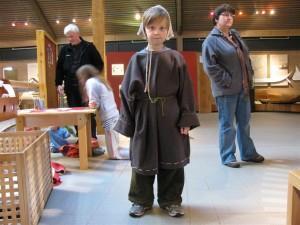 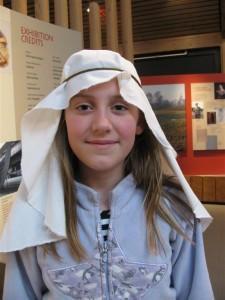 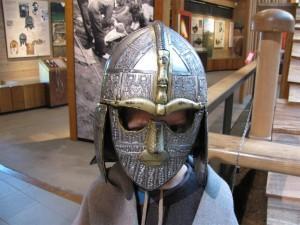 and then retired to the restaurant. 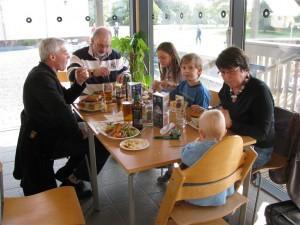 We have visited before, and we have eaten there before. So we knew we were going to have a good day out.

It was more than good.

The kids had a fab time in the exhibition – even smallest enjoyed herself and crawled around and drew. As you can see, Small dressed up, although we couldn’t find the tunic dress for Big, so she settled on just trying on the headdress. And then the meal was absolutely fantastic.

When we went in I went up to the till to explain I had the voucher, and was greeted with “we’ve been expecting you” which was a pretty good start to the conversation. The voucher was for 4 ppl to each have a meal up to £20 including a drink, but the guy on the till said that we could just have whatever we wanted and he’d keep track and let us know when we ran out of money.

We tried quite hard, but we only went 15p over. Think that was Smallest’s gingerbread man 😆

The rest of the adults had a steak and ale pie, while as the token veggie I settled on leek and stilton bread and butter pudding. I was slightly disappointed when mine came out as it looked like I had more salad than pudding, but tbh the portion size was actually about perfect. Although I did have room to squeeze in apple and berry crumble for dessert. I gave up on my beer though (Tim was heartbroken to have to finish it for me 😉 ) and was impressed to discover that they have jugs of water and glasses on offer, so you can just help yourself. It’s a good touch.

They also have Tripp Trapp high chairs, so smallest got to sit right up to the table, all the better to steal food from everyone’s plate. Apparently mushrooms, steak, and potatoes are good, and custard is even better, either cold from Aunty S’s trifle, or warm from my crumble.

All the staff were friendly and helpful and the children enjoyed their meatballs too – proper meatballs with chunky bread and cheese on top. And they had jelly for afters.

All in all, I can’t speak too highly of our day out – we had a wonderful time, and I would really recommend Sutton Hoo, both for the education, and for the food. 🙂