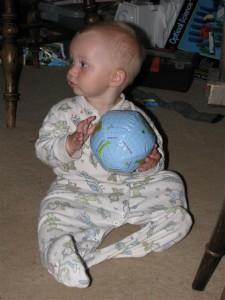 I don’t do those monthly letter to a baby posts that so many bloggers do. But I’ve realised that I barely mention soa except in passing, so I thought I would do a post focussing on her as she is right now, or in another month or so I’ll have forgotten.

She’s 10 months old. Adorable, smiley, happy girl most of the time. She’s beginning to communicate with us – two nights ago we had very definite signing, using the milk sign for want (which I think is quite common) and a clear tap to the side of her face for please. I was feeding her strawberries at the time, which I suspect are her all time favourite food.

Closely followed by pasta. She loves pasta. Preferably with tomato sauce on it. That’s proper pasta tomato sauce, not ketchup like her older brother and sister 😉

There’s very little she won’t eat, although I still don’t think she’s eating huge quantities of food. And she’s still breastfed on demand, here or out and about, though she doesn’t demand quite so often now. I realised that I don’t mention that on here any more, because it’s just part of our days, how we do things. Like I don’t mention the cloth nappies, or wearing her in a wrap, or the fact that where I go, she goes, pretty much, although I have snuck out to the shops a couple of times, that sort of thing.

She’s nearly walking. Up on her feet wherever she can pull herself up. Into anything and everything – she loves the remote control. And she’s very fond of anything with wires or vaguely technical. Which makes life in this house very interesting 😉

She’s nearly talking too. She’s very vocal, burbles to herself, sings to us and we’ve been so close to recognisable words. I kind of want her to start talking, and I kind of don’t. Once the talking starts then she really is her own little person and right at the moment she’s still my baby. Although she does have one tooth now, and I think more on the way.

There are downsides of course. I find it very difficult to cut her fingernails, so when she flailed at my face the other day and caught my eyeball, I spent some time in our local minor injuries unit the next morning. And I’m having to put gloop in my eye and I can’t wear my lenses until it’s all healed up 🙁

Not much of a downside though tbh. Though it’ll be fun to wind her up with it when she’s about 10 I guess 😉

What else? She loves music. She can be distracted from tantrums by pulling the cord on her singing Winnie the Pooh bear and sung to sleep by Daddy’s rendition of 12 Days of Christmas. She dances to the soundtrack of the kids’ odd TV shows and laughs when we giggle at her.

She is such a joy to have around. And she makes for a happier family. It’s good.