Now, I read Grit. And I think she’s hilarious. I’ve even met her, and was utterly tongue tied and admiring when she admitted to having read my blog too 🙂

So it was with a sinking feeling that I read her post this week, about blog advertising, specifically wrt school uniforms.

It *is* that time of year, many children *are* returning to, or starting, school, and companies are offering all sorts of enticements and competitions to get the parents to buy their uniform from them. ClothingAtTesco have been doing school uniform giveaways, and after falling over them left, right , and centre on many of the blogs I read, I admit I was a bit terse when I started directing tweets at them.

I shouldn’t have been. Because the response was really lovely. Turns out there’s a real person behind the tweets, and she offered me the same value of the uniform packs they’ve been sending out – £15 per child for Big and Small and the chance for a reader to win £30 voucher for themselves.

Now, I know that I have in the past ranted about the Tescopoly. And I’m likely to continue doing so because I have real concerns about their corporate approach. But I can’t be Grit and promote home education by being pantswettingly funny, so I’ll do it how I can, by gently inserting myself into online conversations and memes and gradually increasing the numbers of ppl out there who know about home ed, and even (virtually) know a home educator. You never know, there could be a few ppl who pop over to this post and discover that while we may well be a bit unusual educationally speaking, at least we do wear clothes too 🙂

And so to the clothes.

Sadly, all the fairtrade clothes in the Tesco children’s clothing range appear to be school uniform. Because I do prefer to buy fairtrade when I can. And in fact I’ll even buy secondhand in preference to new not fairtrade (something to think about there Tesco 😉 ). So I had to go for other things.

Big is tall and slender, so I chose her a three pack of handkerchief hem T shirts and a pair of jeggings. Small is a huge Ben 10 fan, so it was easy to pick a top, and he likes jeans so that was easy too. 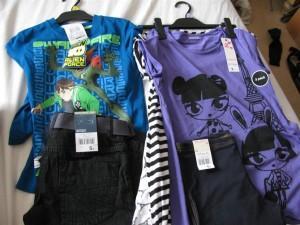 All the clothes fit well, probably because I chose by height instead of age. Well, OK, there’s plenty of growth room in Small’s jeans, but as the waist has those neat elastic things, they don’t fall off and he doesn’t mind turn ups 😉 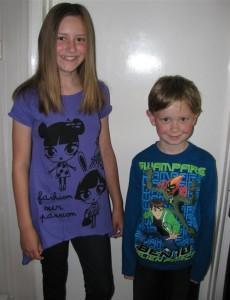 And they are both very happy with them. 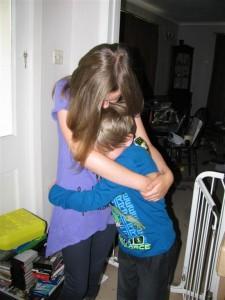 I had a choice of how to run this giveaway, so I’m going to give you a choice too. You can either pick the outfit you’d most like to see me wearing from the clothing at Tesco range (even if it’s the outfit that you think would make me look most ridiculous 😉 ), or pick your (not) back to school outfit. And if you do use school, you could pick an outfit for wearing back on the school run (but remember, no pjs allowed) 😉 Post your selections up to the value of £30 in the comment box, and I’ll get Big to choose the outfit she likes best (don’t worry, I’ll blank out the names before I get her to choose 😉 ).

I’m going to run this for a week, then we’ll choose our winner next Saturday evening at 7pm BST. Enjoy!

[Small print. Giveaway is sponsored by ClothingAtTesco and the winners details will be passed to them to sort out the prize. If you don’t want your details passing on, don’t enter. Giveaway UK only. Thank you.]

ETA comments closed now, Big will be choosing a winner in a little while 🙂