At Cybermummy I met a number of PR ppl who wanted me to review things. Giddy with the thought of goodies for the kids, I said yes all over the place. And then I got home and started feeling guilty about the consumerism and all the stuff that we were going to be sent, but it wasn’t so bad really, we haven’t been sent all that much.

And what we have been sent hasn’t been all that bad either.

toy. It breaks several of our rules. We don’t like toys that go on being noisy when the child stops interacting – so musical instruments are OK, but toy radios are not. And I don’t really like toys that are limited in use – I much prefer ones that can be used, and adapted, are versatile and last, encouraging imagination rather than being specifically ‘educational’.

Having said that, when I looked through our toys that have been kept through the years to be handed down from child to child, I realised that Tomy supplied quite a few of them. There’s the shape sorter that I think was Big’s, now devoid of a few of its shapes, sadly, but still going strong otherwise. Not that soa was particularly happy with it today when she somehow contrived to trap a finger between it and a shape – she wailed and wailed! Poor thing.

And there’s the rather fabulous little clicker toy. Bought this one for Big to play with in the car on the nursery runs, and I’m sure that both Tim and I played with it more than she did. It’s very ergonomic and just outright tempting to touch, even though it’s plastic (I usually prefer wood.)

So I was prepared to be receptive to Mr Colour Maker, even if I couldn’t quite see the point of a singing plastic paint pot. Then it arrived, and I *really* couldn’t see the point. There didn’t seem to be any instructions with it, and so I left the kids trying to figure it out – can’t remember quite what I was doing that day, but I do remember I was running around madly. (Yes, this product arrived a few weeks ago. Still, this means it’s a well considered review :blush:) They got it singing, and figured out pouring paint in, but it wasn’t til I read a review somewhere else (and no, sorry, I can’t remember where or I would link!) that I learnt that the modes are controlled by opening and closing the lid. 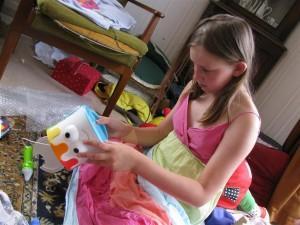 Just as well the lid is easy to replace then, as it certainly comes off fairly easily!

This toy is a little old for soa at 9 months, although she does enjoy having the rainbow song sung to her, and rather young for the other two. But we had a toddler friend round and he thought it was pretty good I think, so I’d guess it’s probably best suited to children a bit over a year old. And I’d follow that up by guessing that it would go on being interested for a few months, but after that you might find that a child had actually mixed real paint in it to find out whether the pot knew any more colours. 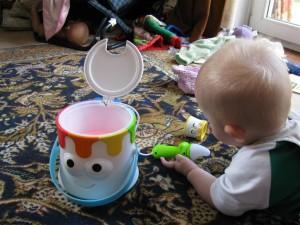 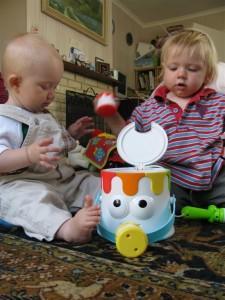 My main gripe with it is that you can’t store all the little paint pots and the brush in the main pot and close the lid – this was obviously not designed by a parent who needs to tidy things away. And it’s a little reluctant to be turned off. Having said that, it is a very clever toy, and fascinating to play with in terms of making the different colour lights light up. I particularly enjoy emptying all the little pots in and getting him in a muddle, but I’m a bit of a rebel that way 😉

All in all, I feel this is a bit overpriced for a toy with basically only one mode of play, but it would probably make a good present to stay at Grandma’s or a.n.other relatives where messy play is not encouraged but education is. It’s certainly not up to our other Tomy offerings, but innovative enough that Tomy remains a toymaker we are interested in.

*In case it isn’t absolutely clear, we were sent Tomy Mr Colour Maker for review. The other toys were ours already.