and wondering what to type. Not a standard problem for me, it’s usually choosing which of the myriad of blogposts I’ve composed through the day in my head I should write down, but for some reason tonight I have a blank mind.

Could be because it’s so quiet. Tim has toothache so has taken painkillers and gone to bed. The children, including the baby and the extra borrowed girl, are fast asleep – apparently being walked a mile to the beach, spending an hour and a half in the sea, then walking on to the leisure centre and swimming for another hour and a half before walking the mile back again is quite tiring. I’d agree tbh, especially as I was carrying the baby, a rucksack and my swimming stuff in another bag.

And then when I got home it was to realise that we’d run out of cereal, so had to feed the baby into compliance and run round to the coop. My new pedometer is reporting that I’ve done 6.89 km today at an average speed of 6.12 kph. Coo. Actually I’d have thought I’d been active longer than that as I fetched in two loads of washing and hung out another two before we left, but maybe I’m not active enough to register as active when hanging out washing.

So that was our day. Tarnished ever so slightly by Big’s goggles going missing in the swimming pool – she took them off to hold the baby and handed them to me, and given that I was watching 4 children instead of watching two and holding one, I didn’t really pay attention to them. By the time she remembered they were gone, even though we searched the pool. Annoyingly I think I saw the woman who pinched them, even spoke to her, as her son was trying to make off with our seal sticks so I had to go take them off him. I thought at the time she looked at me oddly when I asked if she’d seen the missing goggles, but I could hardly go up to her and demand them back.

🙁 Really upset about my stupidity there, they are £10 a pair. And she was ever so upset too, and it wasn’t her fault, it was mine. Next pair she gets will be marked up with her name in very visible name on the side, then let’s see if anyone pinches them.

Hm. Am going to have to disturb the baby soon, as I think she’s done something foul. And she’s slept through teatime, which means I’m in for a night of her snacking. Bleargh.

yesterday’s HE group art session, no prizes for regular readers who work out where the extra child is from 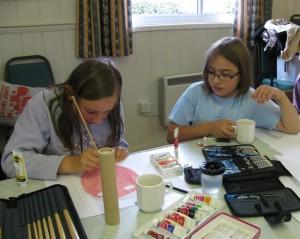 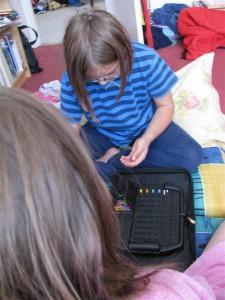 at the beach. Again. 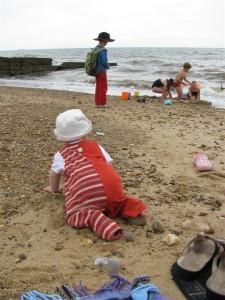