I have been waiting since January for my children to deschool, stop watching endless CBBC or playing on mind numbing websites, for them to show and develop some interests and learn to get along instead of screeching and bickering all day.

I’ve run out of patience 🙁

Maybe I don’t respond in the right way or quickly enough to expressed interests? Perhaps my purposive conversation is either not present enough or too purposive? Perhaps eight months isn’t a long enough deschooling time frame for three years of flexi school at Montessori?

Or perhaps my children just need a bit of structure and to be stretched every now and then. I’m so sold on autonomy and the theories of John Holt that I’ve felt terribly guilty this week – but not guilty enough to not impose a work requirement on the offspring.

So now, each morning, we do a bit of maths, a bit of english and something else. The something else varies from day to day, and I’ve tried to follow up on their interests. The TV is banned between the hours of 9 and 3 (would be 9 and 5, but realistically, that would mean that 3 days a week one or the other of them would see no TV and I can’t be that hard hearted). They each still have their two half hour computer slots, and if they are doing something educational/ work related, computer time extends.

And how has it worked this week?

Well, the first day Small did his work quickly and cheerfully. By the third day, he was resistant, thinking of anywhere he’d rather be and anything he’d rather be doing. Which is irritating, because when he does come in and get set to, it takes him minutes to do the amount of maths I’m asking of him, another few minutes to read a chapter of the book I bought for him as he couldn’t think what he’d like to read (The Thing from Knucker Hole (Young Hippo Adventure)

), and then he tends to enjoy whatever the third part is. So he loved science, liked looking at maps, and had no problems listening to and discussing The Story of the World: Ancient Times v. 1

Big is another story. Her maths will improve with steady practise, but we’ve discovered that her English needs work in a number of areas. And I think that is what is holding her back doing some of the other things she wants to do. So instead of doing a unit a week from Focus on Literacy: Pupil Textbook Bk.5

we’re going to do a unit every other week and concentrate on basics in between times. Handwriting, spelling, punctuation, grammar, that sort of thing. Most of the time she reads of her own accord, although she had been on strike waiting for the next book in the series she’s reading, Conspiracy (Lady Grace Mysteries)

. That’s arrived now, so she’s reading again on an evening.

I’d kind of assumed that a child who reads as voraciously as she does would pick up the other stuff, but she isn’t doing, so I need to target it more directly. Still really wish I could find Small’s english book so that we could do bits out of that as well. But wherever he’s put it, it’s staying hidden 🙁

She loved the experiment she did this week, out of Outer Space (Funstations)

I’d found. Lit candles under varying sizes of jars so that we could see what happened when the oxygen ran out. And we’d been having conversations about first ppl during the week anyway, so nomads in story of the world worked well for her.

In and amongst there was Brownies, Beavers, swimming, a not back to school picnic afternoon on the beach (fabulous weather, kids were in the sea on and off all afternoon), Tim popped to old hosue and brought back all the baby stuff so the children washed it all in the garden yesterday, oh and some blokes came round and cut down one of the hedges. Small cried. Turned out he’d really liked that hedge, even though Tim and I loathed it, and though we’d discussed removing it several times, Small hadn’t picked up on the discussions.

I’ve processed yet more bags of stuff from old house and now have large piles of clothing to process into storing. Oh, and Small had another visit to the doctors, who said that he has chronic otitis and prescribed a months worth of penicillin just in case it’s bacterial. Which apparently it probably isn’t. So am still umming and ahing over what to do about that.

This afternoon Tim and Small are at a Beavers mini Olympics – looks like Small at least is having fun. 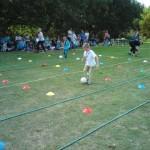